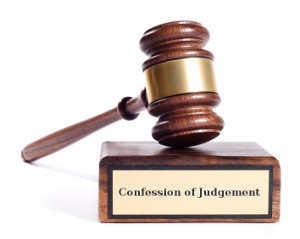 A recent case challenging the denial of a petition to open a confessed judgment has been granted appeal by the Pennsylvania Supreme Court.  The case of Graystone Bank v. Grove Estates, 58 A.3d 1277, 2012 PA Super 274 (2012) has been appealed to determine the validity of the warrant of attorney which did not appear on the signature page of the agreement.  The Superior Court affirmed the lower court’s decision that there was a “direct relation” between the warrant and the signature where the warrant appeared in all capital letters, in conspicuous print, on the penultimate page of the agreement.  The Superior Court also affirmed the lower court’s decision that a new warrant was not required in a modification of the original agreement, where the modification merely extended a maturity date.  However, the Superior Court remanded the issue of the reasonableness of the attorneys’ commission.  The first two issues may have been avoided by requiring the execution of a separate one-page “Disclosure for Confession” document, or by requiring a signature under the warrant of attorney, and re-stating the warrant of attorney in all modification agreements.

The facts are as follows:  Graystone Bank (the “Bank”) made a loan to Grove Estates LP (the “Borrower”) in August 2008, which matured in September 2010.  Prior to the maturity date, the parties entered into a Change in Terms agreement which extended the maturity date to November 2010.   The original promissory note contained a warrant of attorney in all capital letters that appeared on the page immediately preceding the signature page. Significantly, the Change in Terms did not contain a new warrant of attorney.

The Borrower was attempting to refinance in order to pay the Bank’s loan in full prior to the new maturity date in November 2010.  Borrower failed to do so, and the Bank confessed judgment against the Borrower in York County Court of Common Pleas in February 2011.  Borrower filed a timely Petition to Open or Strike the confessed judgment, arguing that the judgment should be stricken for three reasons:  (1) the cognovit clause did not appear on the signature page of the original promissory note; (2) there was no cognovit clause contained in the Change in Terms agreement; and (3) the attorneys’ fees of 10% of the outstanding balance were excessive and unreasonable.

The Superior Court adopted the lower court’s analysis regarding the cognovit clause in the original promissory note.  The Court noted that under Pennsylvania law, the signature of the executor of an agreement must “directly relate” to the warrant.  A general reference is insufficient to bind the executor to a warrant of attorney not contained in the body of the document.[1] The Superior Court itself has also recently held that a cognovit clause is invalid where it is located in an unsigned addendum which is “incorporated by reference” in, and attached subsequent to the signature page of an agreement.[2]

However, the Court noted that the direct relation test was met.  The warrant of attorney appeared conspicuously in all capital letters at the bottom of the page prior to the signature page, and immediately preceded where the Borrower signed at the top of the following page.  The Court noted that unlike the precedent cited above, this case was distinguishable because the warrant did not appear altogether outside the body of the agreement, or too remote from the signature, or on pages subsequent to the signature.

The Superior Court also adopted the lower court’s analysis regarding the lack of a cognovit clause in the Change in Terms Agreement.  The Court reasoned that the Change in Terms was nothing more than an extension of the maturity date of the original note.  Therefore, since it was not a “new, comprehensive agreement” as argued by the Borrower, the absence of a cognovit clause was not fatal to the confessed judgment.  This raises an interesting issue if an extension does more than simply extend the maturity date – at what point does it become a “new, comprehensive agreement.”

The Superior Court remanded the issue raised regarding the attorneys’ commission.  The Court noted that even where a contract authorizes fee-shifting in a particular amount, that amount must still be reasonable under the circumstances.  It was not clear whether the lower court engaged in a reasonableness inquiry regarding the 10% commission.

The Pennsylvania Supreme Court granted allocatur of the Graystone case in July 2013 regarding the issue of the validity of the confessed judgment in connection with the first two issues raised by the Borrower.  Stay tuned for developments in this matter.