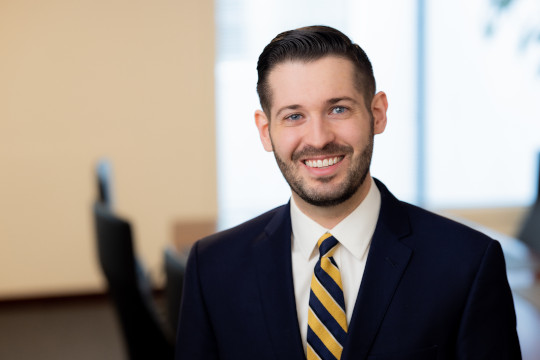 Matt Korenoski is an associate who practices Municipal and School Law, Zoning and Land Use, and Litigation. Matt has represented government bodies, including townships, boroughs, zoning hearing boards, and other local authorities, in matters involving zoning, land use, Right to Know Law, tax assessments, eminent domain, and sewage and water issues. He has assisted in drafting ordinances that regulate certain, emerging uses like medical marijuana and drones. He also represents individuals in similar public sector-related matters. Matt has argued on behalf of municipalities, businesses, and individual clients in various court proceedings, including successful oral arguments before the Pennsylvania Commonwealth Court.

While in law school, Matt also served as a judicial extern for the Honorable Thomas M. Hardiman at the U.S. Court of Appeals for the Third Circuit. He also interned in-house at two large Pittsburgh corporations, where he researched issues including international franchising, intellectual property, and privacy rights, and reviewed contracts with vendors and independent contractors.

Matt has repeatedly been named a “Top Lawyer” in Municipal Law by Main Line Today Magazine since 2021, has been recognized by Best Lawyers in America: Ones to Watch™ for Land Use and Zoning Law and Municipal Law and has received the Daily Local’s Top Lawyers of Chester County Reader Choice Award since its inception in 2021.

Outside of his legal practice, Matt enjoys playing tennis and traveling with his wife, and spending time with family and friends. Originally from Johnstown, PA, he also enjoys rooting for his beloved Pittsburgh Steelers, Penguins, Pirates, and Panthers.